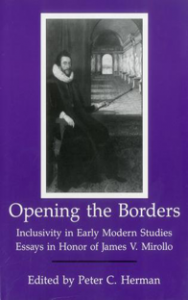 Early modern studies is increasingly devoted to opening the borders between supposedly discrete areas of study, including antithetical theoretical approaches, and Opening the Borders provides examplars of this eclectic practice. This collection includes studies of both English and Continental subjects, and it demonstrates that the circulation of older and newer critical practices across borders between various “demarcated” theoretical zones enhances our understanding of early modern texts and culture.