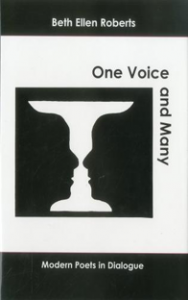 Dialogue poetry inevitably recapitulates the question of the One and the Many because such poems must be understood both as the product of the one voice of the poet and as the multiple voices of the poems’ speakers. When dialogue poems address issues relevant to the One/Many problem, then, such poetry represents a union of form (associated with the Many by analogy with the body) and content (associated with the One by analogy with the soul). Different conceptions of the relationships between unity and multiplicity may be presented by varying the three distances inherent in dialogue poetry, each of which represents a degree of differentiation: the distance between the speakers, the distance between the poet and the speakers, and the distance between the speakers and the reader. This book examines the ways in which W. H. Auden, Thomas Hardy, T. S. Eliot, W. B. Yeats, Robert Frost, and Louis MacNeice, all of whom were in dialogue with one another on these questions, manipulate these distances in adaptations of traditional forms of dialogue poetry (eclogue, dialogue of self and soul, ballad, and drama.) Through these manipulations, these poets reconcile form and content to the extent that the resulting works reflect the positions on the problem of the One and the Many advocated within each poem.

About the Author
Beth Ellen Roberts is an independent scholar. She has published a number of articles on modern poetry and on American- and Anglo-Jewish literature, most recently an article on W. H. Auden’s philo-Semitism in the Journal of Modern Literature.