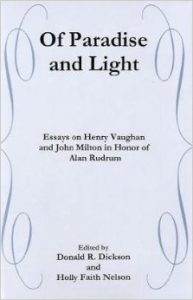 This collection examines intertextual intersections in the works of Henry Vaughan and John Milton and considers their aesthetic, philosophical, or political implications. The theoretical pluralism of the volume reveals the variety and complexity of textual relations in the words of these early modern authors. Some of the essays focus on the author’s conscious creation of intertext, others explore the reader’s negotiation of books within books, while still others examine the linguistic effect of textual intersections. The essays not only consider material borrowing, but also explore the absorption of concepts or formal structures from antecedent texts. The volume not only adds to the debate on Milton’s iteration, duplication, and renovation of precursor texts, but represents the first collection of original essays on the poetry and prose of Henry Vaughan. Essays are authored by experts in the field.