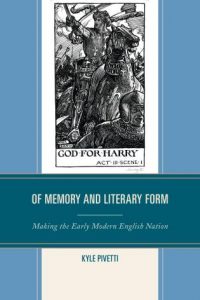 This book opens with a crisis of recollection. In the early modern period, real political traumas like civil war and regicide exacerbated what were already perceived ruptures in myths of English descent. William Camden and other scholars had revealed that the facts of history could not justify the Arthurian myths, nor could history itself guarantee any moment of collective origin for the English people. Yet poets and playwrights concerned with the status of the emerging nation state did not respond with new material evidence. Instead, they turned to the literary structures that—through a range of what the author calls mnemonic effects—could generate the experience of a collective past. As Sir Philip Sidney recognized, verse depends upon the repetitions of rhyme and meter; consequently poetry “far exceedeth prose in the knitting up of memory.” These poetic and linguistic forms expose national memory as a construction at potential odds with history, for memory operates like language—through a series of signifiers that acquire new meaning as one rearranges and rereads them. Moving from the tragedy Gorboduc (1561) to Dryden’s Absalom and Achitophel (1681), Pivetti shows how such “knitting up of memory” created the shared pasts that generate nationhood. His work implies that memory emerges not from what actually occurred, but from the forms that compose it. Or to adapt the words of Paul Ricoeur: “we have nothing better than memory to signify that something has taken place.” The same is true even when that “something” is nationhood.

About the Author
Kyle Pivetti is assistant professor of English at Norwich University.