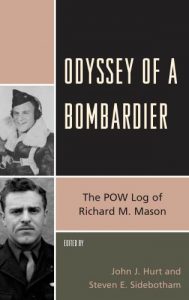 Odyssey of a Bombardier is the illustrated Prisoner of War “log” that depicts the experiences of bombardier Richard M. Mason in German prison camps after his B-17 “Flying Fortress” was shot down by the Germans in France in 1944, the final year of World War II. The log follows Mason from the day his plane crashed until his liberation in April, 1945, and his return home to the United States. Included are such topics as medical treatment and rehabilitation for wounded prisoners of the Germans, life in Stalag Luft III, a difficult long march in an arctic winter to another camp, the travails of prisoners in the overcrowded, filthy camp at Moosburg, critical food shortages, and the arrival of General George Patton with the liberating forces. Mason was an amateur artist and illustrated his journal with moving depictions of prison life and comradeship. This book shows U.S. airmen demonstrating grace and courage under pressure and meeting every challenge that their imprisonment presented.