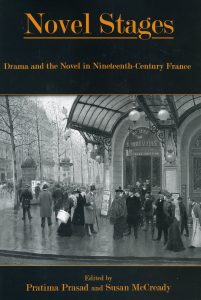 Aimed at examining the intersections between the drama and the novel in nineteenth-century France, this collection of essays reorients scholarly attention to the central place of the theater in nineteenth-century life. Although not limited to a single critical approach, the essays in this collection share common intellectual concerns: the inscription of theatrical aesthetics within the novel; the widespread practice among nineteenth-century novelists of adapting their works for the stage; and the novel’s engagement with popular forms of theater. Each of the ten essays provides insight into a specific aspect of the relationship between the theater and the novel in the nineteenth century. Read together, their distinct perspectives form an overview of the literary landscape of nineteenth-century France. Bridging the gap between the drama and the novel, Novel Stages engages readers across the sometimes divisive lines of critical theory, cultural studies, and genre studies.