University of Delaware Press
by Howard B. Norland 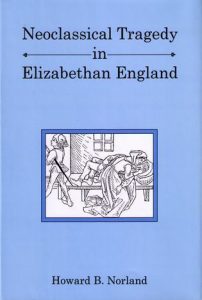 This book examines the development of neoclassical tragedy during the reign of Elizabeth I (1558-1603). The first chapter investigates the Elizabethan views of tragedy expressed by critics of the theater, including Gosson, Stubbes, and Rainolds, and defenders of poetry and drama such as Lodge, Philip Sidney, and Gager. The next chapter focuses on the English translations of Seneca’s tragedy between 1559 and 1581. Subsequent chapters discuss the four extant Inns of Court tragedies performed in the sixteenth century, Legge’s Richard Tertius and Alabaster’s Roxana performed in Latin at Cambridge University, and Gager’s three extant Neo-Latin tragedies performed at Oxford University. The last chapter considers three tragedies that were translated or modeled upon Garnier’s French tragedies: Mary Sidney’s translation of Marc Antoine, Daniel’s Cleopatra, and Kyd’s translation of Cornelie.

About the Author
Howard B. Norland is Emeritus Professor of English at the University of Nebraska.