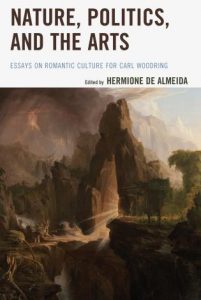 This interdisciplinary book honors Columbia professor and New York intellectual Carl Woodring. Chapters on Romantic and Victorian literary culture written by leading scholars in the field join in conversation with Woodring’s teachings on literature and visual art and his commentaries on American culture. A multiple-authored chapter of postscripts on the aesthetic range of Woodring’s intellectual interests across cultural disciplines, his contributions to English studies and his informing influence on several generations of scholars, and their areas of interest, follows. A chapter from Woodring’s unpublished autobiography, on his childhood in small-town America, then concludes the volume with an ironic retrospection on intercultural origins.

Chapter essays, commentaries, and Carl Woodring’s unpublished writings function together in Nature, Politics, and the Arts: Essays on Romantic Culture for Carl Woodring—with a depth of original perspectives and a multi-voiced and intercultural coherence. The book as a whole testifies to Woodring’s living and intellectually potent legacy for future students of nineteenth-century transatlantic culture and twenty-first century scholarship on literature and art.

About the Editor
Hermione de Almeida is Walter Professor Emerita of English and comparative literature at the University of Tulsa.