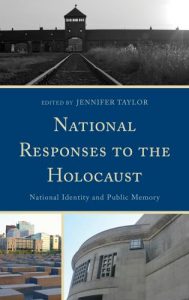 The Holocaust is an international event, but the brutal crimes happened in specific places and are remembered, to a large degree, in various national discourses. The essays in this book examine the complex and often ambiguous relationship between national identity and the legacy of the Holocaust in countries including Lithuania, Poland, France, Germany, Austria, Italy, the United States, and Israel. Specificity about place and national context matters very much when we talk and write about the Holocaust, and this book takes up important questions about the relationship between the traumatic past and our sense of place, language, and cultural or political identity in the post-Holocaust world.

About the Editor
Jennifer Taylor is associate professor of German Studies in the department of modern languages and literatures at the College of William and Mary.