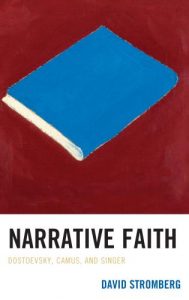 Narrative Faith engages with the dynamics of doubt and faith to consider how literary works with complex structures explore different moral visions. The study describes a literary petite histoire that problematizes faith in two ways—both in the themes presented in the story, and the strategies used to tell that story—leading readers to doubt the narrators and their narratives. Starting with Dostoevsky’s Demons (1872), a literary work that has captivated and confounded critics and readers for well over a century, the study examines Albert Camus’s The Plague (1947) and Isaac Bashevis Singer’s The Penitent (1973/83), works by twentieth-century authors who similarly intensify questions of faith through narrators that generate doubt. The two postwar novelists share parallel preoccupations with Dostoevsky’s art and similar personal philosophies, while their works constitute two literary responses to the cataclysm of the Second World War—extending questions of faith into the current era. The book’s last section looks beyond narrative inquiry to consider themes of confession and revision that appear in all three novels and open onto horizons beyond faith and doubt—to hope.

About the Author
David Stromberg is a postdoctoral scholar of literary studies at the Hebrew University of Jerusalem.