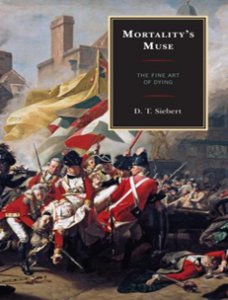 The inevitability of death—that of others and our own—is surely among our greatest anxieties. Mortality’s Muse: The Fine Art of Dying explores how art, mainly literary art, addresses that troubling reality. While religion and philosophy offer important consolations for life’s end, art responds in ways that are perhaps more complete and certainly more deeply human. Among subjects treated: the ars moriendi or “art of dying” tradition; the contrast between past and more recent cultural values; the religious consolation’s value but shortcoming for some people; the role of art in offering a secular consolation; dying as a performing art; the philosophic ideal of good death; the lively appeal of carpe diem or living for the present moment; the elegiac sense of life; and the two opposite parts Mortality’s Muse has played in dealing with war, the most senseless and unnecessary cause of death.

The idea of an aesthetic sense of life forms the basis of these discussions. Human beings are makers in the largest sense of the word, and art represents everything they make—civilization itself with all its greatness and failings. Our civilization may ultimately be nothing but an evanescent blip in the cosmos. Even so, the creation of beauty, meaning, and purpose from disorder and suffering defines us as human beings. In the words of Robinson Jeffers, even if monuments eventually crumble and all art perish, yet for thousands of years carved stones have stood and “pained thoughts found the honey of peace in old poems.”

About the Author
D. T. Siebert is Distinguished Professor Emeritus of English Literature at the University of South Carolina, Columbia.