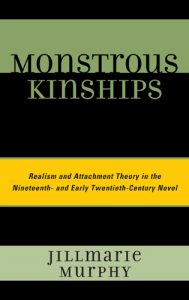 Monstrous Kinships: Realism and Attachment Theory in the Nineteenth- and Early Twentieth-Century Novel investigates the connection between realist fiction of the nineteenth and early twentieth centuries and the psychoanalytic approach of John Bowlby’s Attachment Theory. Attachment Theory arises from the guiding principles of realism and the veratist’s devotion to long-term, direct observation of subject matter. Additionally, because Attachment Theory originated in the field of child psychoanalysis, this book highlights the detrimental effects of parental obsession and abandonment, industrialism, poverty, alcoholism, religious addiction, and physical, emotional, and sexual abuse on child characters. The subject of Monstrous Kinships is timely, as literary critics and theorists as well as creative writers continue to expand their range of inquiry to include the child as primary subject in various treatments of post-colonial and transnational culture.

About the Author
Jillmarie Murphy is assistant professor of English at Union College. She is the coeditor (with Ronald A. Bosco) of Hawthorne in His Own Time: A Biographical Chronicle of His Life, Drawn from Recollections, Interviews, and Memoirs by His Family, Friends, and Associates and a contributor to the The Oxford Handbook of Early American Literature.