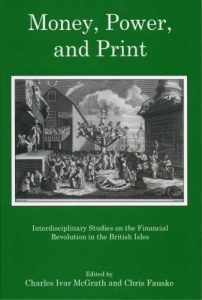 This collection gathers together the expertise of scholars in several disciplines in order to examine the manner in which financial and economic arguments were expressed in pamphlets, broadsides, and longer works of literature in the seventeenth and eighteenth centuries, and to assess to what extent the political realities of the day were informed by these debates or, alternatively, shaped the rhetoric. The contributors to the volume draw upon an extensive variety of contemporary sources and modern analyses of the formative years of the financial revolution to reexamine many of the existing conventional ideas about the relationship between money, power, and print, and to suggest that the subject is far more complex and interrelated than most studies up to now have indicated. Particular attention is paid to the fact that the financial revolution did not occur in London in isolation from the various regions of the British Isles.

About the Editors
Charles Ivar McGrath is lecturer in History at University College Dublin.
Chris Fauske is associate dean in the School of Arts and Sciences at Salem State College.