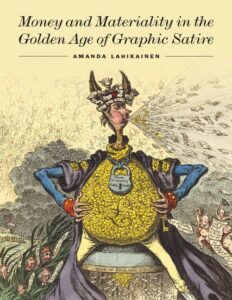 This book examines the entwined and simultaneous rise of graphic satire and cultures of paper money in late eighteenth- and early nineteenth-century Britain. Asking how Britons learned to value both graphic art and money, the book makes surprising connections between two types of engraved images that grew in popularity and influence during this time. Graphic satire grew in visual risk-taking, while paper money became a more standard carrier of financial value, courting controversy as a medium, moral problem, and factor in inflation. Through analysis of satirical prints, as well as case studies of monetary satires beyond London, this book demonstrates several key ways that cultures attach value to printed paper, accepting it as social reality and institutional fact. Thus, satirical banknotes were objects that broke down the distinction between paper money and graphic satire ​altogether.

Amanda Lahikainen is the executive director of the Ogunquit Museum of American Art in Ogunquit, Maine. Prior to joining OMAA, she served as an associate professor of art history and chairperson of the art department at Aquinas College in Grand Rapids, Michigan.