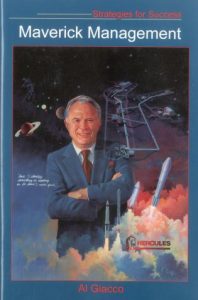 Maverick Management: Strategies for Success is the memoir of Al Giacco, the former chairman and CEO of Hercules. The book focuses on Giacco’s role in key developments at Hercules, including establishing Hercules as a major player in the aerospace industry, providing troubleshooting leadership for the polymers division, restructuring Hercules to deal with the changes created by the energy crisis, improving communication through innovations in advanced management technology, and using the joint venture to develop successful companies, such as Himont. The book also describes his leadership in the movement to lower taxes in order to attract new jobs to Delaware. It explains his crucial role in transforming Delaware into the nation’s banking capital. The book concludes with his analysis of Hercules’ troubles since his departure, speculates on the causes of these problems, and forecasts the company’s future.

About the Author
Al Giacco is now the chairman of Axess, a high-tech venture promoting an innovative polymer.