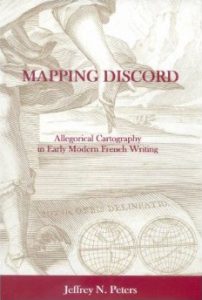 Mapping Discord examines a series of allegorical maps published in France during the seventeenth century that cast in spatial terms a number of heated aesthetic and social debates. It discusses the convergence of map-making and literary creation in the context of early modern cartographic practice, and demonstrates that the unique language of allegorical cartography raises important theoretical questions about the relations between rationalist discourses of science and the figural designs of imaginative writing. In detailed analyses of the imaginary maps that appeared in the seventeenth-century novels and stories, as well as of maps, atlases, and geographic treatises produced by professional scholars and engineers of the period, Mapping Discord considers the ideological structure and uses of cartographic language, and argues that allegorical maps have much to tell us about the potential capacity of every map to operate as a visual metaphor for power. Illustrated.

About the Author
Jeffrey N. Peters is Associate Professor of French at the University of Kentucky.