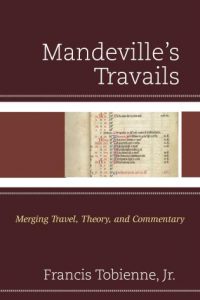 This book offers a critical methodology for analyzing travel literature. The subject of travel literature, as well as travel literatures, have not always been regarded with respect or given much critical attention. In order to amend this lack of positive reception, I analyze the late medieval text Mandeville’s Travels, specifically the Cotton MS. This text, though not overly popular currently, was among the most popular pieces of literature for well beyond its fourteenth century inception in some 300 manuscripts divided into three groups as well as early printed editions; further, this text offers a way in which to approach other pieces of travel literature. To facilitate this critical process I propose a 7-part method: 1. Identify and Define the Problem, 2. Make Observations, 3. Look for Regularities, 4. Wonder Why Regularities Exist, 5. Propose a Hypothesis, 6. Use an Experiment and 7. Have Reproducible Results. Of note, Mandeville’s Travels is both the impetus behind this 7-part method, as well as the object of study. Thus, I showcase how each element of the 7-part method is at play in the text, even as I argue for the text’s importance within Medieval Studies. Also included in this examination is the application of this 7-part method to medieval and post-period pieces of literature. The book culminates in an argument for the canonization and importance of Mandeville’s Travels in and beyond Medieval Studies.

About the Author
Francis Tobienne, Jr. (Ph.D., PURDUE) is professor of literature, writing, and humanities in the department of English at South University, Tampa and Senior Dalí Research Fellow at the Salvador Dalí Museum, St. Petersburg, Florida. Dr. Tobienne is the author of The Position of Magic in Selected Medieval Spanish Texts (2008), and the editor of Occultus: the Hidden and Macabre in Literature and Film (2016).