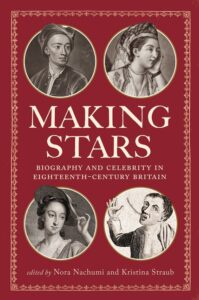 In bringing biography and celebrity together, the essays in Making Stars interrogate contemporary and current understandings of each. Although biography was not invented in the eighteenth century, the period saw the emergence of works that focus on individuals who are interesting as much, if not more, for their everyday, lived experience than for their status or actions. At the same time, the concept of celebrity emerged as the public fascination with the private lives of publicly visible individuals increased. Biography and celebrity are mutually constitutive, but in complex and varied ways that this volume unpacks.

The contributors reject the idea that biography is limited to print or is a single author’s account of another individual’s coherent life story. Instead, the contributors present us with a cacophony of voices, speaking from multiple positions in the public sphere through multiple media, shaping life stories in which contradictions trouble the linear arch that defines an individual’s personal development and history. Making Stars provides readers with a picture of eighteenth-century celebrity that is mediated across multiple sites with varied and sometimes contradictory effects, demonstrating that eighteenth-century celebrity culture in Britain was more pervasive, diverse and, in many ways, more egalitarian, than previously supposed.

Nora Nachumi is an Associate Professor in the Department of English and coordinator of the minor in Women’s Studies at Stern College for Women, Yeshiva University in New York, NY. She is the author of Acting Like a Lady: British Women Novelists and the Eighteenth-Century Stage and has published essays and book chapters on female novelists, playwrights, pedagogy and film adaptation.

Kristina Straub is a Professor of Literary and Cultural Studies at Carnegie Mellon University in Pittsburgh, Pennsylvania. She is the author of Sexual Suspects: Eighteenth-Century Players and Sexual Ideology and Domestic Affairs: Intimacy, Eroticism, and Violence Between Servants and Masters in Eighteenth Century Britain, as well as numerous articles on eighteenth-century theatre, sexuality, and gender. She co-curated “Will & Jane: Shakespeare, Austen, and Literary Celebrity” at the Folger Shakespeare Library with Janine Barchas.