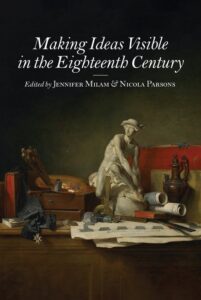 This volume considers how ideas were made visible through the making of art and visual experience occasioned by reception during the long eighteenth century. The event that gave rise to the collection was the 15th David Nochol Smith Seminar in Eighteenth-Century Studies, which launched a new Australian and New Zealand Society of Eighteenth-Century Studies. Two strands of interest are explored by the individual authors. The first four essays work with ideas about material objects and identity formation, suggesting how the artist’s physical environment contributes to the sense of self, as a practicing artist or artisan, as an individual patron or collector, or as a woman or religious outsider. The last four essays address the intellectual work that can be expressed through or performed by objects. Through a consideration of the material formation of concepts, this book explores questions that are implicated by the need to see ideas in painted, sculpted, illustrated, and designed forms. In doing so, it introduces new visual materials and novel conceptual models into traditional accounts of the intellectual history of the Enlightenment.

Jennifer Milam is the Pro Vice Chancellor (Academic Excellence) at the University of Newcastle in Callaghan, Australia. Her books on rococo art include Historical Dictionary of Rococo Art, Fragonard’s Playful Paintings, and an edited collection Women, Art and the Politics of Identity in Eighteenth-Century Europe.

Nicola Parsons is a senior lecturer in English at the University of Sydney in Australia. She is the author of Reading Gossip in Early Eighteenth-Century England.