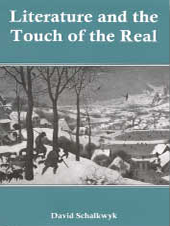 Literature and the Touch of the Real offers a critique of neo-Saussurean theories of the constitution of the world through language or the essential divorce of language from the real. It does this by, first, offering a critical account of the contradictions and omissions of Saussure’s Course in General Linguistics. Secondly, in a revisionist reading of Jacques Derrida, it argues that far from reducing reality to language, Derrida’s concept of the “text” in fact argues that the world cannot be eradicated from the linguistic. Thirdly, it offers an account of Ludwig Wittgenstein’s concepts of “grammar,” “criteria,” “aspect perception,” and “language-games” that reintegrates language and the world while avoiding the instrumentalist pitfalls of realism and empiricism. In two final chapters, it shows how Derrida and Wittgenstein may be used to illuminate the nature of the historicist criticism represented by Robert Weimann and Stephen Greenblatt, respectively.

About the Author
David Schalkwyk is Associate Professor and Head of the Department of English at the University of Cape Town, South Africa.