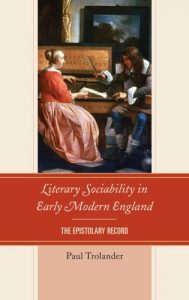 This study represents a significant reinterpretation of literary networks during what is often called the transition from manuscript to print during the early modern period. It is based on a survey of 28,000 letters and over 850 mainly English correspondents, ranging from consumers to authors, significant patrons to state regulators, printers to publishers, from 1615 to 1725. Correspondents include a significant sampling from among antiquarians, natural scientists, poets and dramatists, philosophers and mathematicians, political and religious controversialists. The author addresses how early modern letter writing practices (sometimes known as letteracy) and theories of friendship were important underpinnings of the actions and the roles that seventeenth- and early eighteenth-century authors and readers used to communicate their needs and views to their social networks. These early modern social conditions combined with an emerging view of the manuscript as a seedbed of knowledge production and humanistic creation that had significant financial and cultural value in England’s mercantilist economy. Because literary networks bartered such gains in cultural capital for state patronage as well as for social and financial gains, this placed a burden on an author’s associates to aid him or her in seeing that work into print, a circumstance that reinforced the collaborative formulae outlined in letter writing handbooks and friendship discourse. Thus, the author’s network was more and more viewed as a tightly knit group of near equals that worked collaboratively to grow social and symbolic capital for its associates, including other authors, readers, patrons and regulators. Such internal methods for bartering social and cultural capital within literary networks gave networked authors a strong hand in the emerging market economy for printed works, as major publishers such as Bernard Lintott and Jacob Tonson relied on well-connected authors to find new writers as well as to aid them in seeing such major projects as Pope’s The Iliad into print.

About the Author
Paul Trolander is professor of British literature in the English Department at Berry College.