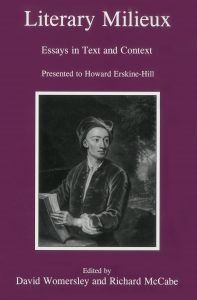 In the wake of the formalist “New Critical” consensus of the mid-twentieth century, a central and recurrent problem in the field of literary study has been that of precisely how the literary text was to be related to the various and proliferating contexts that now jostled for critical attention. The quality of balanced judgment was suddenly especially valuable. These essays range over the fields of Erskine-Hill’s own scholarship, from Shakespeare and early modern literature to Wordsworth, evincing in their own procedures and discriminations the influence of his own example: scrupulous care over the handling of evidence, an interdisciplinary impulse yoked always to a prizing of the literary (particularly of the poetic), a willingness to embrace an ambitious argument where it can be supported, a humaneness of temper, particularly in polemic. Latent within them all is a wrestling with that central problem of text and context that preoccupied Erskine-Hill throughout his career, and which is still the dominant issue in literary studies.