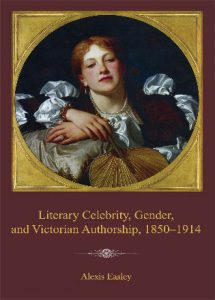 This study examines literary celebrity in Britain from 1850 to 1914. Through lively analysis of rare cultural materials, Easley demonstrates the crucial role of the celebrity author in the formation of British national identity. As Victorians toured the homes and haunts of famous writers, they developed a sense of shared national heritage. At the same time, by reading sensational accounts of writers’ lives, they were able to reconsider conventional gender roles and domestic arrangements. As women were featured in interviews and profiles, they were increasingly associated with the ephemerality of the popular press and were often excluded from emerging narratives of British literary history, which defined great literature as having a timeless appeal. Nevertheless, women writers were able to capitalize on celebrity media as a way of furthering their own careers and retelling history on their own terms. Press attention had a more positive effect on men’s literary careers since they were expected to assume public identities; however, in some cases, media exposure had the effect of sensationalizing their lives, bodies, and careers. With the development of proto-feminist criticism and historiography, the life stories of male writers were increasingly used to expose unhealthy domestic relationships and imagine ideal forms of British masculinity.

The first section of Literary Celebrity explores the practice of literary tourism in Victorian Britain, focusing specifically on the homes and haunts of Charles Dickens, Christina Rossetti, George Eliot, Elizabeth Barrett Browning, and Harriet Martineau. This investigation incorporates analysis of fascinating cultural texts, including maps, periodicals, and tourist guidebooks. Easley links the practice of literary tourism to a variety of cultural developments, including nationalism, urbanization, spiritualism, the women’s movement, and the expansion of popular print culture. The second section provides fresh insight into the ways that celebrity culture informed the development of Victorian historiography. Easley demonstrates how women were able to re-tell history from a proto-feminist perspective by writing contemporary history, participating in architectural reform movements, and becoming active in literary societies. In this chapter she returns to the work of Harriet Martineau and introduces a variety of lesser-known contributors to the field, including Mary Gillies and Mary Ward. Literary Celebrity concludes with a third section focused on the expansion of celebrity media at the fin de siècle. These chapters and a brief coda link the popularization of celebrity news to the de-canonization of women writers, the professionalization of medicine, the development of the open space movement, and the institutionalization of English studies. These investigations elucidate the role of celebrity media in the careers of Charlotte Robinson, Marie Corelli, Mary Braddon, Harriet Martineau, Thomas Carlyle, Ernest Hart, and Octavia Hill.

About the Author
Alexis Easley is associate professor of English at the University of St. Thomas in St. Paul, Minnesota.