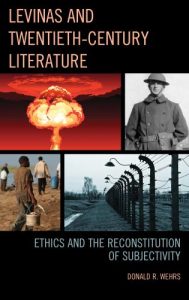 In thirteen essays on writers ranging from Virginia Woolf and A. A. Milne to J. M. Coetzee and Cormac McCarthy, Levinas and Twentieth-Century Literature puts the thought of the twentieth-century’s most innovative ethical philosopher, Emmanuel Levinas, in dialogue with established twentieth-century masterpieces, such as Six Characters in Search of an Author, As I Lay Dying, One Hundred Years of Solitude, and Gravity’s Rainbow, as well as with such innovative recent works as Tony Kushner’s Angels in America and Gabrielle Ghermandi’s Regina di fiori e di perle, depicting Italian colonization of Ethiopia and African immigration to Italy.

Essays in the collection consider new media (radio) and explore such issues as the ethics of representation in British and American modernism, memory and subject formation in children’s literature, voice in radio, embodiment and performance in drama, trauma and affectivity in postcolonial, postmodern contexts, narrative depiction of temporal disorientation in contemporary fiction, and the challenges of fashioning ethical literary responses to the horrific and unspeakable. An introduction situates Levinas’s thought in relation to both the history of Western philosophy and current critical theory, and an overview of Levinas’s career considers his work as a response to the twentieth-century European experience from pre-World War One progressivism to 1980s anti-immigrant agitation.

Each essay highlights both how Levinas’s work may contribute to literary criticism and how literary criticism may interrogate and refine philosophical discourse. By delineating connections linking literature, philosophy, critical theory, and cultural-historical analysis, the collection situates Levinas within the contexts of his own century even as it offers accounts of the unity and diversity of literature the century produced. In articulating relationships between Levinasian themes and preoccupations and those shaping modernism, postmodernism, postcolonialism, feminism, gender studies, globalism, and in exploring the kinship between Levinas’s work and other forms of anti-totalizing twentieth-century thought, the collection probes how modernist technique and anti-totalizing ethics enter into relations that, by the turn of the twenty-first century, not only revitalize diverse national literatures but also produce post-national, migrant, or hybrid literatures marked by explorations of the entwinement of trauma and ethical subjectivity whose theorization Levinas pioneers.

About the Author
Donald R.Wehrs is professor of English at Auburn University.