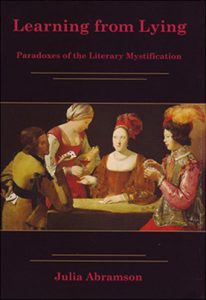 Writers who mystify operate through paradox. Since the eighteenth century, when the term was coined in French, the cycle of temporarily taking in a reader by means of a deceptive text, then deliberately uncovering the fake, has enacted a drama of Enlightenment. Obfuscation reveals trickery, in an exercise that simultaneously embodies the ideals of Enlightenment and interrogates their limits. In Learning from Lying the lens of mystification reveals a singular literary history. Analyses of works by Diderot, Mérimée, and Hildesheimer follow out the cosmopolitan roots of the genre in the Republic of Letters and show how it theorizes literature through practical experiment. For textual imitation revealed lays bare the necessary collusion between reader and writer that allows literature to exist as such. By clearly situating mystification on the continuum that ranges from fiction to forgery, Learning from Lying provides a timely intervention in current debates about the study of fakes. Illustrated.

About the Author
Julia Abramson is Assistant Professor of French at the University of Oklahoma.