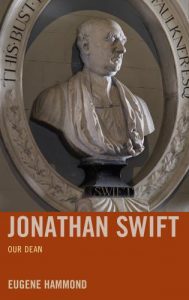 Jonathan Swift: Our Dean details the political climax of his remarkable career—his writing and publication of The Drapier’s Letters (1724), Gulliver’s Travels (1726), and A Modest Proposal (1729)—stressing the relentless political opposition he faced and the numerous ways, including through his sermons, that he worked from his political base as Dean of St. Patrick’s Cathedral, psychologically as well as physically just outside the Dublin city walls, to attempt to rouse the Irish people to awareness of the ways that England was abusing them.

This book faces squarely the likelihood that Swift had a physical affair with Esther Vanhomrigh between 1719 and 1723, and reassesses in the light of that likelihood his conflicting relations with Esther Vanhomrigh and Esther Johnson. It traces the many loving friendships with both men and women in Ireland that sustained Swift during the years when his health gradually failed him, enabling him to continue indefatiguably, both through his writings and his authority as Dean of St. Patrick’s, to contribute to the public welfare in the face of relentless British attempts to squeeze greater and greater profits out of their Irish colony. Finally, it traces how Swift’s political indignation led to his treating many people, friends and enemies, cruelly during the 1730s, even while his humor and his ability to make and attract new friends sustained themselves until his memory finally failed him in 1742.

This biography, in two books, Jonathan Swift: Irish Blow-in and Jonathan Swift: Our Dean, comes closer than past biographies to capturing how it felt to Swift himself to live his life.

About the Author
Eugene Hammond is director of the writing program at Stony Brook University.

Reviews of 'Jonathan Swift: Our Dean'

“
Any decent biography of a writer will make you want to go back to the work, and Hammond achieves this.

”
- Eighteenth Century Fiction
“
The ﬁrst study to consider here is the two-volume life of Swift by Eugene Hammond. These are magisterial volumes.