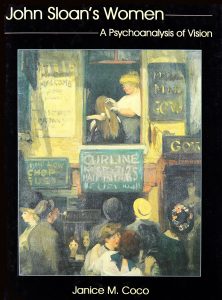 John Sloan (1871-1951), a member of the revolutionary group of painters called “The Eight,” was best known for his pictures of early twentieth-century New York City. Using psychoanalysis (object relations theory) and social history, Janice M. Coco explores the individual and social identities that inform Sloan’s many representations of women. She examines the ways that he defined defined himself as both man and artist at a time when the ideals of masculinity and artistic identity were at issue. The author contends that Sloan’s perception of women, as potentially threatening to his manhood and his career, manifests itself subtextually as the fetishized nature of his windowed compositions. This study links Sloan’s controversial viewing practices (his peeping Tomism) to his fear of women and to the critical reception of his art. In particular, his recurring window motif embodies a general anxiety regarding invasion of privacy at the turn of the twentieth century. Finally, Coco attempts to unravel the web of misunderstanding that has shrouded Sloan’s nude studies, a large body of self-conscious yet insightful images that has thus far defied explanation. Illustrated.