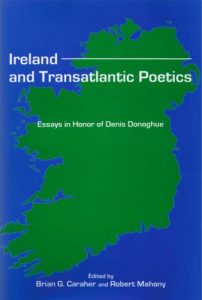 “Transatlantic poetics” is the principal theme and the constructive burden of these essays. The motive toward its articulation lies in the demand for cross-national, international, and post-nationalist comprehension of cultural relations and critical practices across modern Anglophone British, Irish, and North American literary developments, literary filiations, and literary history. Anglophone literary study needs to articulate ever more clearly the poetics of literary practices, including the cultural politics of literary histories and literary reading. Ireland is a small island, yet its finest writers have insistently articulated its modern culture within a transatlantic neighborhood stretching from continental Europe across the British and Irish archipelago to the western reaches of North America. Modern Dublin is a cultural location for constructing transatlantic literary relations and poetics. This collection foregrounds modern Dublin, its writers, its universities, its literary journals, its teachers, and critics of English Studies, as well as the contested critical construction of regional and international poetics and cultural politics that emerges from the often tense interaction of local and global literary practices and critical desires.

About the Editors
Brian Caraher holds the Chair of English Literature at Queen’s University, Belfast.
Robert Mahony is Professor of English and Director of the Center for Irish Studies at the Catholic University of America.