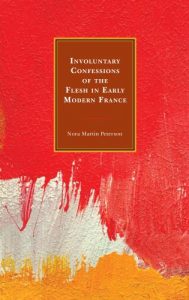 Involuntary Confessions of the Flesh in Early Modern France was inspired by the observation that small slips of the flesh (involuntary confessions of the flesh) are omnipresent in early modern texts of many kinds. These slips (which bear similarities to what we would today call the Freudian slip) disrupt and destabilize readings of body, self, and text—three categories whose mutual boundaries this book seeks to soften—but also, in their very messiness, participate in defining them. Involuntary Confessions capitalizes on the uncertainty of such volatile moments, arguing that it is instability itself that provides the tools to navigate and understand the complexity of the early modern world. Rather than locate the body within any one discourse (Foucauldian, psychoanalytic), this book argues that slips of the flesh create a liminal space not exactly outside of discourse, but not necessarily subject to it, either. Involuntary confessions of the flesh reveal the perpetual and urgent challenge of early modern thinkers to textually confront and define the often tenuous relationship between the body and the self. By eluding and frustrating attempts to contain it, the early modern body reveals that truth is as much about surfaces as it is about interior depth, and that the self is fruitfully perpetuated by the conflict that proceeds from seemingly irreconcilable narratives.

Interdisciplinary in its scope, Involuntary Confessions of the Flesh in Early Modern France pairs major French literary works of the sixteenth and seventeenth centuries (by Marguerite de Navarre, Montaigne, Madame de Lafayette) with cultural documents (confession manuals, legal documents about the application of torture, and courtly handbooks). It is the first study of its kind to bring these discourses into thematic (rather than linear or chronological) dialog. In so doing, it emphasizes the shared struggle of many different early modern conversations to come to terms with the body’s volatility.

About the Author
Nora Martin Peterson is assistant professor of French at the University of Nebraska-Lincoln.