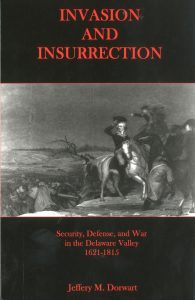 This book seeks to discover when, why, and how Delaware Valley communities, between 1621, when the Dutch West India Company issued instructions for the security and defense of the Delaware River until 1815, as the region abandoned its Committee of Defense of the Delaware at the end of the War of 1812, first used military force to repel invasion in times of war and suppress insurrection in peacetime. It traces how these mid-Atlantic communities confronted constant threats from real or imagined enemies, invasion and insurrection from earliest seventeenth-century settlement and articulated ideas and built institutions for security, defense, and war. It argues that from the beginning these Delaware Valley communities failed to differentiate between their concern for defense against external attacks or invasion in wartime with that of providing security for their home communities against internal enemies during peacetime. Though conflicted about using force both to defend against invasion and suppress insurrection, over time as the Delaware Valley communities moved to the center of colonial wars, revolution, and establishment of a republic and constitutional government, their long experience with security, defense, and war that blurred the lines between military defense in wartime and preserving peacetime security eventually fused into Article 1, section 8 of the U.S. Constitution to “empower the congress to use the militia to repel invasion and suppress insurrection.”

About the Author
Jeffery M. Dorwart is professor of military, naval, and New Jersey history at Rutgers University.