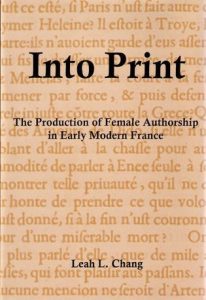 This book examines the role that book production played in shaping notions of female authorship in sixteenth- and early seventeenth-century France. Through close analysis of volumes attributed to Helisenne de Crenne, Louise Labé, the Dame des Roches, and Marie de Gournay against the historical backdrop of the early French book market, Chang shows how the female author acts as a figure, one who often has diverse functions and meanings, in printed books of the period. Focusing on how the female author’s gender, authority, and appeal are crafted in the creation of the material volume, Into Print shows how the production of female-authored volumes influenced early modern concepts of both gender and authorship.

About the Author
Leah L. Chang is Assistant Professor of French at The George Washington University.