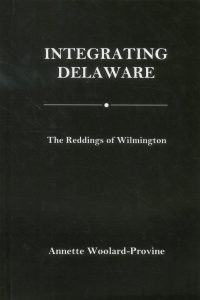 Integrating Delaware: The Reddings of Wilmington tells the story of Delaware’s most nationally influential African-American family and reflects the story of the American black middle class in the twentieth century. Patriarch Lewis Redding arrived in Wilmington in 1900. He earned a hard-won place among the city’s small black middle class after overcoming numerous hurdles presented by race. He shepherded four children through college and into careers as a lawyer, an author, and two schoolteachers. These siblings would feel the weight of race throughout their lives as they struggled against various physical and emotional obstacles. Moreover, as middle-class African Americans—a minority within a minority—the Reddings often failed to connect to their own heritage and to the poor black minority. Yet, they dedicated their lives to battling the laws, customs, and ignorance that had plunged black Americans into a permanent underclass. The Reddings took the lead in integrating Delaware, and played a hand on the national stage, as well. Theirs is a compelling story of the victories, missteps, sacrifice, and pain of an extraordinary American family.

About the Author
Annette Woolard-Provine earned a Ph.D. from the University of Delaware, studying under slavery scholar Peter Kolchin.