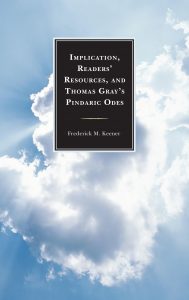 Implication, Readers’ Resources, and Thomas Gray’s Pindaric Odes presents an account of “the Poets’ Secret,” the quite belated, historically recent, discovery by scholars and critics of something many poets have recognized and employed for ages: the sense expressed by allusively parallel parts within a text–sense thus expressed intratextually rather than only intertextually.

Inferential perception of the implicit sense produced logically and linguistically–by enthymemes, implicatures, and other intratextual features, as well as intertextual ones–can be indispensable for readers’ comprehension of literary as well as other texts, especially their difficult passages. Implication, Readers’ Resources, and Thomas Gray’s Pindaric Odes addresses these elusive matters as they have historically been posed by Thomas Gray’s Pindaric odes of 1757, and mainly the first of them, “The Progress of Poesy,” a poem that readers have more or less knowledgeably struggled to understand from the outset. The process of disclosing that ode’s sense can be aided by new further reference to Paradise Lost, in the context of Gray’s largely unpublished Commonplace Book, with its extensive, little-studied, and very pertinent use of Plato and Locke.

About the Author
Frederick M. Keener is professor emeritus at Hofstra University. He has published widely in the field of eighteenth-century literature.