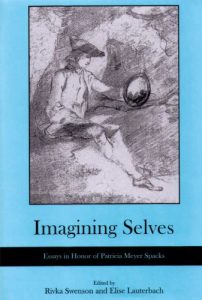 The thirteen essays in Imagining Selves survey diverse cultural artifacts that include memoirs, histories, plays, poems, courtesy manuals, children’s tales, novels, paintings, and even resin from the early seventeenth century to the threshold of the twenty-first. These essays explore relationships between character, context, and text, and engage genres from realism to magic realism, and geographies from England, America, Afghanistan, and Spain. They are organized into three overlapping sections: ‘Genre and Image,’ ‘Reputation and Reception,’ and ‘Re-reading and Retelling.’ While the bulk of the essays focus on the eighteenth century, some extend backward or forward in chronology to engage the overarching theme of selfhood within narrative.

About the Editors
Rivka Swenson is Edgar F. Shannon Postdoctoral Fellow and Lecturer at the University of Virginia.
Elise Lauterbach is an instructor at Rhodes College.