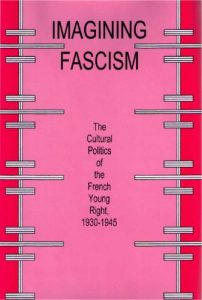 Led by Robert Brasillach and Thierry Maulnier, the ‘Young Right’ emerged as a generational insurgency within Charles Mauarras’s Action française in the early 1930s. Inspired by the mobilizing energies of foreign fascisms, the men of the Young Right became vocal advocates for a French ‘national revolution.’ Combining native strains of French nationalism with selected ‘lessons’ from foreign sources, they soon constructed a distinctive variant of French fascism—one, however, which proved highly unstable. By the eve of the war, the question of fascism fragmented the Young Right itself, creating an ideological impasse that, after 1940, led some to Paris and open collaboration with Germany, others to Vichy to press the case for a radicalization of the National Revolution, and still others back to the Action française and its reactionary brand of nationalism. The odyssey illuminates not only the emergence of the engagé fascist intellectual in France but, more generally, many of the tensions that hindered the formation of a unified French fascist movement.

About the Author
Paul Mazgaj is Associate Professor of History at the University of North Carolina at Greensboro.