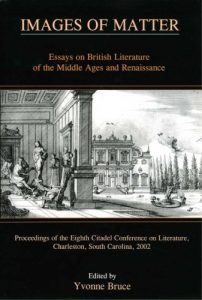 In Images of Matter, a collection of essays first presented at the Eighth Citadel Conference on British Literature of the Middle Ages and Renaissance, the authors of the essays collected address the complex relationship between words and images. The book is organized into three sections, all illuminating aspects of Francis Bacon’s dictum in the Advancement of Learning about the creative act: “words are but the images of matter, and except they have life of reason and invention, to fall in love with them is all one as to fall in love with a picture.” The first section of Images of Matter, “Continuity and Discontinuity,” provides a comparative look at the ways medieval and Renaissance writers thought about the relationship between words and images. In “Words and Matter,” the essays explore the sometimes unbridgeable divide between material and rhetoric—between the thing and its name. The essays in the final section, “Seduced by Vain Philosophy,” pick up where this divide leaves off, addressing the age-old struggle between the scholar’s intellectual need to withdraw and his moral obligation to put his knowledge to worldly use.

About the Editor
Yvonne Bruce is an instructor of English at the University of Akron.