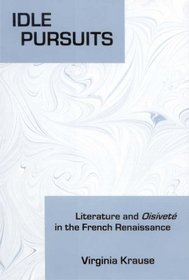 Idle Pursuits examines transformations of leisure in the literature and culture of early modern France. It traces a trajectory beginning with the initial detachment of the ‘idle condition’ from religious contemplation in the thirteenth century and culminating with the birth of the modern contemplative at the end of the Renaissance. How did writers define their idle pursuits? What made mastery of the ‘art of idleness’ such a valuable asset? Idle Pursuits brings insights of social theory to bear on a literary corpus composed of masterpieces such as Le Roman de la Rose and Les Essais as well as less familiar texts including conduct books, romance, and personal letters. The concept of idleness provides a new frame for understanding Renaissance notions of social identity and its manipulation.

About the Author
Virginia Krause is Assistant Professor of French Studies at Brown University.