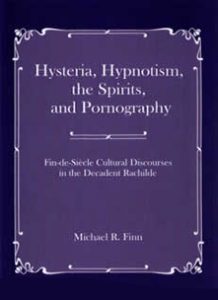 This book explores the life and fiction of the French decadent writer Rachilde (pen name of Marguerite Eymery), using her as a case study to examine the impact late nineteenth-century theories about female hysteria, medical hypnotism, mediums, and spiritualism had on the female creative psyche. Rachilde was especially vulnerable as she suffered hysterical attacks, witnessed a hypnotism craze in France, and was the only child in a family of table-tapping spiritualists. After a biographical first section, chapters examine how hysteria, hypnotism, and spiritualism penetrated the sociocultural fabric of France in the period between 1870-1900, and how Rachilde’s novels represented, unconsciously absorbed, or at other times mocked those discourses. Because she was prosecuted for the “obscenity” of her first major success, Monsieur Venus, this study also situates her writing comparatively within the production of other late-century pornographers. A final chapter analyzes how Rachilde’s work confronts the disabling doctrines of her time and how, out of them, she constructs a unique and productive writing stance.

About the Author
Michael R. Finn is emeritus professor of French at Ryerson University.