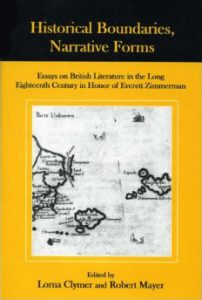 This collection of twelve essays by colleagues, students, and friends of Everett Zimmerman treats four topics that Zimmerman explored during his career: the representation of the self in narratives, the early British novel and related forms, their epistemological and generic borders, and their intellectual and cultural contexts. In “Boundaries,” contributors explore epistemological and narrative distinctions between history and fiction as they meet or overlap in the novel’s relationship to other forms, including providential history, travel narratives, utopias, autobiography, and visual art. In “Forms,” the contributors investigate fictional, historical, and material forms; the impact those cultural phenomena had on the meaning and value attributed to literary works; and how such forms arose in response to historical conditions. The essays describe the historical range of Zimmerman’s work, beginning with Defoe and ending with Coetzee, and treat such key writers of the long eighteenth century as Fielding, Richardson, Walpole, Austen, and Scott.