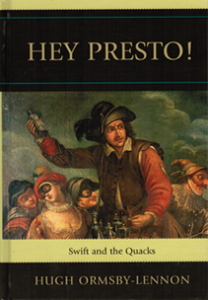 In this book the author reveals how medicine shows, both ancient and modern, galvanized Jonathan Swift’s imagination and inspired his wittiest satiric voices. Swift dubbed these multifaceted traveling entertainments his Stage-itinerant or “Mountebank’s Stage.” In the course of arguing that the stage-itinerant formed an irresistible model for A Tale of a Tub, Ormsby-Lennon also surmises that the mountebank’s stage will disclose that missing link, long sought, which connects the twin objects of Swift’s ire: gross corruptions in both religion and learning. In the early modern medicine show, the quack doctor delivered a loquacious harangue, infused with magico-mysticism and pseudoscience, high-astounding promises, and boastful narcissism. To help him sell his panaceas and snake-oil, he employed a Merry Andrew and a motley troupe of performers. From their stages, many quacks also peddled their own books, almanacs, and other ephemera, providing Grub Street with many of its best-sellers. Hacks practiced, quite literally, as quacks. Merry Andrew and mountebank traded costumes, whiskers, and voices. Swift apes them all in the Tale.

About the Author
Hugh Ormsby-Lennon is professor of eighteenth-century studies at Villanova University.

Reviews of 'Hey Presto! Swift and the Quacks'

“
Ormsby-Lennon’s thesis is both provocatively original and as old as Jonathan Swift’s Tale of a Tub itself […] Indeed, this book’s chief strength is its careful, sustained exhumation of so much relevant material. […] the book’s sheer contextualizing detail makes it an invaluable, sustaining resource for future Swift scholarship.
”
- Choice
“
There is a significant crop of books on Swift, of which the most important is Hugh Ormsby-Lennon’s Hey Presto! Swift and the Quacks […] It is a work of vast erudi­tion and sharp insight […] and provides one of the most interesting recent developments in Swift studies.

”
- Recent Studies in the Restoration and Eighteenth Century
“
Hey Presto! presents the type of “history” Swift himself preferred, the charged rhetorical version that regularly issued from his own gene of satire.