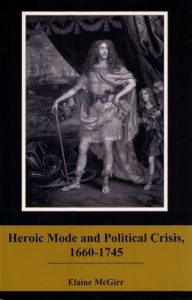 This book explores a cultural language, the heroic, that remained consistently powerful through the social, political, and dynastic turbulence of the long eighteenth century. The heroic provided an accessible and vivid shorthand for the ongoing ideological debates over the nature of authority and power, the construction of an ideal masculinity, and the shape of a new, British—rather than English—national identity. An analysis of this cultural language and its different valence over time not only unpacks the overlap between aesthetic and political debate in the late seventeenth and early eighteenth centuries, but also firmly grounds the eighteenth-century’s revolution in taste and manners in the ongoing ideological debates about dynastic politics and the foundations of authority. Specifically, the book traces the making and breaking of the Stuart mythology through the development of and attacks on the heroic mode from the Restoration through the aftermath of the 1745 Jacobite uprising.

About the Author
Elaine McGirr is a Senior Lecturer in the departments of Drama and English at Royal Holloway, University of London.