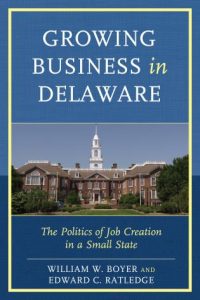 In this fourth book in the authors’ series about public affairs in Delaware, the state’s strategies to maintain a business-friendly environment are examined, especially by awarding grants and loans to grow businesses and jobs. The book addresses the nation’s 2008-2014 Great Recession that was very severe in Delaware. Among the large Delaware employers that disappeared were Chrysler, General Motors, and Avon. Meanwhile, DuPont cut many jobs, while MBNA’s sale to Bank of America also caused many job losses. This small state’s efforts to deal with this overwhelming crisis are analyzed. Accordingly, the book is timely regarding politics and policy choices involving jobs, competition with other states, and a host of other problems.

The remaining four chapters complete the book’s analysis. Chapter seven discusses a potpourri, or hodge-podge, of many more large and small firms that received state grants or loans, showing the process followed no consistent rationale in its entirety, except to note it lacked transparency. Chapter eight concentrates on other means to grow businesses that create jobs, such as tax preferences and real estate development projects. Chapter nine discusses the permeation of politics, defined as the process of affecting the allocation of resources. In this sense, the politics of job creation became ubiquitous, involving variously the media, political parties, special interests, government and business leaders, and citizens and their groups—depending on the situation. The concluding Chapter ten discusses what the authors have learned from their study.

About the Authors
William W. Boyer is The Charles Polk Messick Professor Emeritus, Department of Political Science and International Relations, University of Delaware.

Edward C. Ratledge is director of the Center for Applied Demography and Survey Research, College of Human Services, Education and Public Policy and associate professor, School of Public Policy and Administration, University of Delaware.