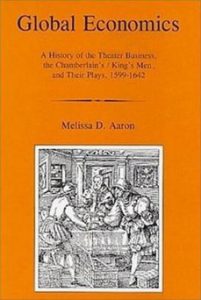 This book is a study of the Chamberlain’s/King’s Men as a business. It investigates the economic workings of the company: the conditions under which they operated, their expenses and income, and the ways in which they adopted to fit changing circumstances. Each chapter focuses on a different moment in the company’s history, and consists of “economic readings,” exploring texts by Shakespeare and other authors through an economic lens, as the property of the company and through the circumstances in which they were written. Henry V is read against the building of the Globe Theatre, Hamlet as a summation of the company’s economic status. As the company became more conservative, its expenses higher, its productions more lavish, and its repertory and audience smaller, its also became more financially vulnerable.

About the Author
Melissa D. Aaron is an Associate Professor of English in the Department of English and Foreign Languages at CSU Pomona.