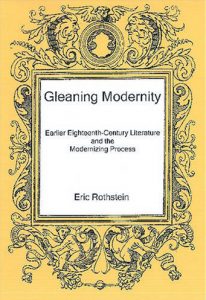 Gleaning Modernity shows how earlier eighteenth-century literary texts might have eased the way for Britain’s increasing Modernity. They allowed Modern scenarios to be played out imaginatively, as simulations for experimental, predictive ends. The process spoke to the needs and desires of readers in a world of rapid, managed change. It worked unobtrusively first because of the practice of recycling old forms, as Pope and Richardson did, for example, with Horatian and tragic models, respectively; and second because given texts offered different readers a range of interpretative options. Along with providing original readings of such major texts as Gulliver’s Travels and Clarissa, this study enlarges our sense of the Modernizing process. It also shows how a consumer-driver, Darwinian model of adaptive change, affecting literature and its readership, can help us understand the ways in which literature can have social efficacy.

About the Author
Eric Rothstein is Edgar W. Lacy Professor of English Emeritus at the University of Wisconsin.