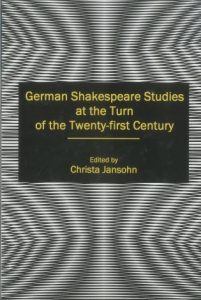 This collection of fifteen essays offers a sample of German Shakespeare studies at the turn of the century. The articles are written by scholars in the old “Bundesländer” and deal with topics such as culture, memory and natural sciences in Shakespeare’s work, Shakespearean spin-offs, and the reception of Venice and Shylock in Germany. The section on the German Shakespeare Society traces another kind of appropriation of Shakespeare in Germany. It discusses the founding of the society in 1864, its situation during the Third Reich, its split in 1963, and its reunification in 1993. This collection of articles (originally written in German) will make available for the first time the significant contribution of German Shakespeare Studies to an English-speaking audience.

About the Editor
Christa Jansohn is Chair of British Studies and Director of the Centre for British Studies, Otto Friedrich University, Bamberg, Germany.