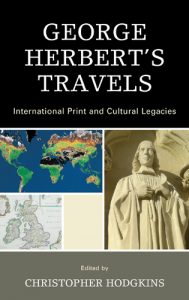 The essays in this collection feature many of the world’s leading Herbert scholars and are drawn from the more than fifty papers and plenary presentations delivered at the “George Herbert’s Travels” conference held at the University of North Carolina at Greensboro in October 2008. They track Herbert’s “heart in pilgrimage”: through four centuries of time, and west and east across space; through the inner spaces of the suffering body and soul; and through modernity into the postmodern.

Remarkably, the home-bound Herbert anticipates many modern and post-modern traveling hopes and anxieties. He knows the call of sheer wanderlust, the craving to escape “abroad,” while also recommending the utilitarian value of travel to improve oneself, to expand one’s cultural, commercial, and spiritual horizons. Yet Herbert also somehow knows the jaded disillusionment, the “grief of pleasures” experienced by the prodigal traveler who has been abroad and abroad and abroad, and strikes the board, and cries “No more!” And in the end-literally, at the end of The Temple, in The Church Militant —he seems to prophesy the present age, in which traveling culture prefigures both millennium and apocalypse.

About the Editor
Christopher T. Hodgkins is professor of English and director of the Atlantic World Research Network at the University of North Carolina at Greensboro. His previous books include Authority, Church, and Society in George Herbert: Return to the Middle Way, Reforming Empire: Protestant Colonialism and Conscience in British Literature, and George Herbert’s Pastoral: New Essays on the Poet and Priest of Bemerton. Currently he is co-editor, with Robert Whalen, of The Digital Temple, the first original-sources born-digital edition of Herbert’s English poetry, and is at work on Anxious Beauty: George Herbert and the Protestant Aesthetic.