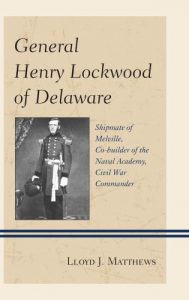 General Henry Lockwood of Delaware: Shipmate of Melville, Co-builder of the Naval Academy, Civil War Commander depicts the fascinating and accomplished life of a nineteenth-century Delaware favorite son, Brig. Gen. Henry Lockwood, who sailed aboard the U.S. Navy frigate United States, participating in Commodore Thomas ap Catesby Jones’s seizure of Monterey from Mexico and figuring importantly in shipmate Herman Melville’s novel White-Jacket. Later he was a co-builder of the U.S. Naval Academy at Annapolis. During the Civil War he pacified the slavery-bound Delmarva peninsula, and commanded a brigade at Gettysburg, the Maryland Heights at Harper’s Ferry, the Middle Department/8th Corps, and a division at Cold Harbor. All these accomplishments occurred in the face of a tendency to stutter that afflicted him throughout his life. The book also notices family members such as son Lieut. James Lockwood, who died of starvation during the Greely polar expedition after having reached the furthest point north of any human; brother Navy Surgeon John Lockwood, whose essays in conjunction with Melville’s White-Jacket were major factors in the outlawing of punitive flogging in the Navy; and son-in-law Adm. Charles Sigsbee, who was in command of the Maine when it blew up in Havana Harbor. Several pivotal events in Lockwood’s life have unjustly led to his historical neglect. Lockwood finally receives his due in this book.

About the Author
Lloyd J. Matthews is a retired Army colonel.