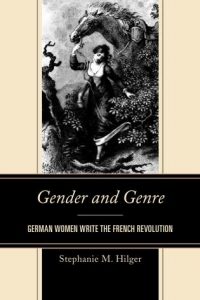 In the wake of the French Revolution, history was no longer imagined as a cyclical process in which the succession of ruling dynasties was as predictable as the change in the seasons. Contemporaries wrestled with the meaning of this historical rupture, which represented both the progress of the Enlightenment and the darkness of the Terreur. French authors discussed the political events in their country, but they were not the only ones to do so. As the effects of the French Revolution became more palpable across the border, German authors pondered their implications in newspapers, political pamphlets, and historiographical treatises. German women also participated in these debates, but they often embedded their political commentary in literary texts because they were discouraged, and sometimes even barred, from publishing in explicitly political and public venues. As such, literature, in the sense of belles lettres, had a compensatory function for women: it allowed them to engage in political discussion without explicitly encroaching on certain domains that were perceived as a male preserve.

As women writers explored the uses of literature for political commentary they adapted major literary genres in order to consolidate their position in the late eighteenth- and early nineteenth-century literary sphere. Those genres included domestic fiction, the historical novel, historical tragedy, autobiography, the Robinsonade, and the Bildungsroman. Women writers challenged the images of women traditionally portrayed in these genres: dutiful daughter, submissive wife, caring mother, tantalizing mistress, angelic figure, and passive victim. Gender and Genre discusses six women writers who replaced these traditional female types with women warriors and emigrants as protagonists in texts published between 1795 and 1821: Therese Huber, Caroline de la Motte Fouqué, Christine Westphalen, Regula Engel, Sophie von La Roche, and Henriette Frölich. These authors’ protagonists question traditional images of passive femininity, yet their battered bodies also depict the precarious position of women in general, and women writers in particular, during this period. Because women writers were attacked by their male counterparts who attempted to halt their foray into the literary marketplace, these texts are as much about power dynamics in the German literary establishment as they are about French politics.

About the Author
Stephanie M. Hilger is associate professor of comparative literature, German, and gender and women’s studies at the University of Illinois at Urbana-Champaign.