University of Delaware Press
by Natalie Schroeder and Ronald A. Schroeder 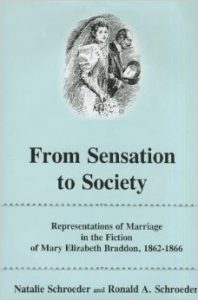 From Sensation to Society tracks the evolution of Mary Elizabeth Braddon’s critique of Victorian marriage in the early phase of her long and prolific novel-writing career. The study begins with Braddon’s two famous sensational novels, Lady Audley’s Secret (1862) and Aurora Floyd (1863); it ends with her first novel of “society,” The Lady’s Mile (1865). In the novels of this period, Braddon proved herself to be a relentless critic of the patriarchal powers and privileges that determined the conditions of marriage for women. As she depicted in the lurid excesses of sensationalism, at its worst, marriage for women amounted to a sentence of cruel and unjust imprisonment in a world of insanely distorted values. Subsequent novels rigorously dissect the contradictions in the Victorian ideal of middle-class marriage and dramatize how the conditions of marriage undermine marital happiness and result in the compromise of marital fidelity. An advocate of moderate reform, Braddon offers alternative models of marriage in which companionate harmony prevails.

About the Author
Natalie Schroeder and Ronald A. Schroeder are professors in the English department at the University of Mississippi.