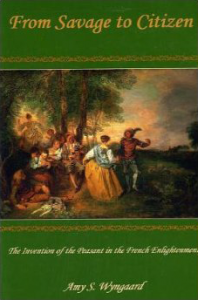 From Savage to Citizen examines the invention of the peasant in the literature, theater, and painting of the French Enlightenment. It contends that, much like the noble savage, the peasant is one of the major constructions of the Enlightenment, and that its articulation and development are consonant with changes in the social order and the development of bourgeois ideologies over the course of the century. The first three chapters explore how the peasant came to embody notions of the self-made man, family values, and patriotic ideals through the works of writers such as Marivaux, Rousseau, Favart, Sedaine, Marmontel, and Retif de la Bretonne and the painters Watteau, Greuze, and Fragonard. A final section considers the contradictions inherent to Enlightenment constructions of the peasantry through an analysis of agricultural policy, debates on popular education and feudal servitude, and contemporary travel accounts. Filling an important gap in French literary and cultural criticism, the book shows how images of the country and its inhabitants played a key role in the development of modern conceptions of the French nation and citizen. Illustrated.

About the Author
Amy S. Wyngaard is an Assistant Professor at Syracuse University.